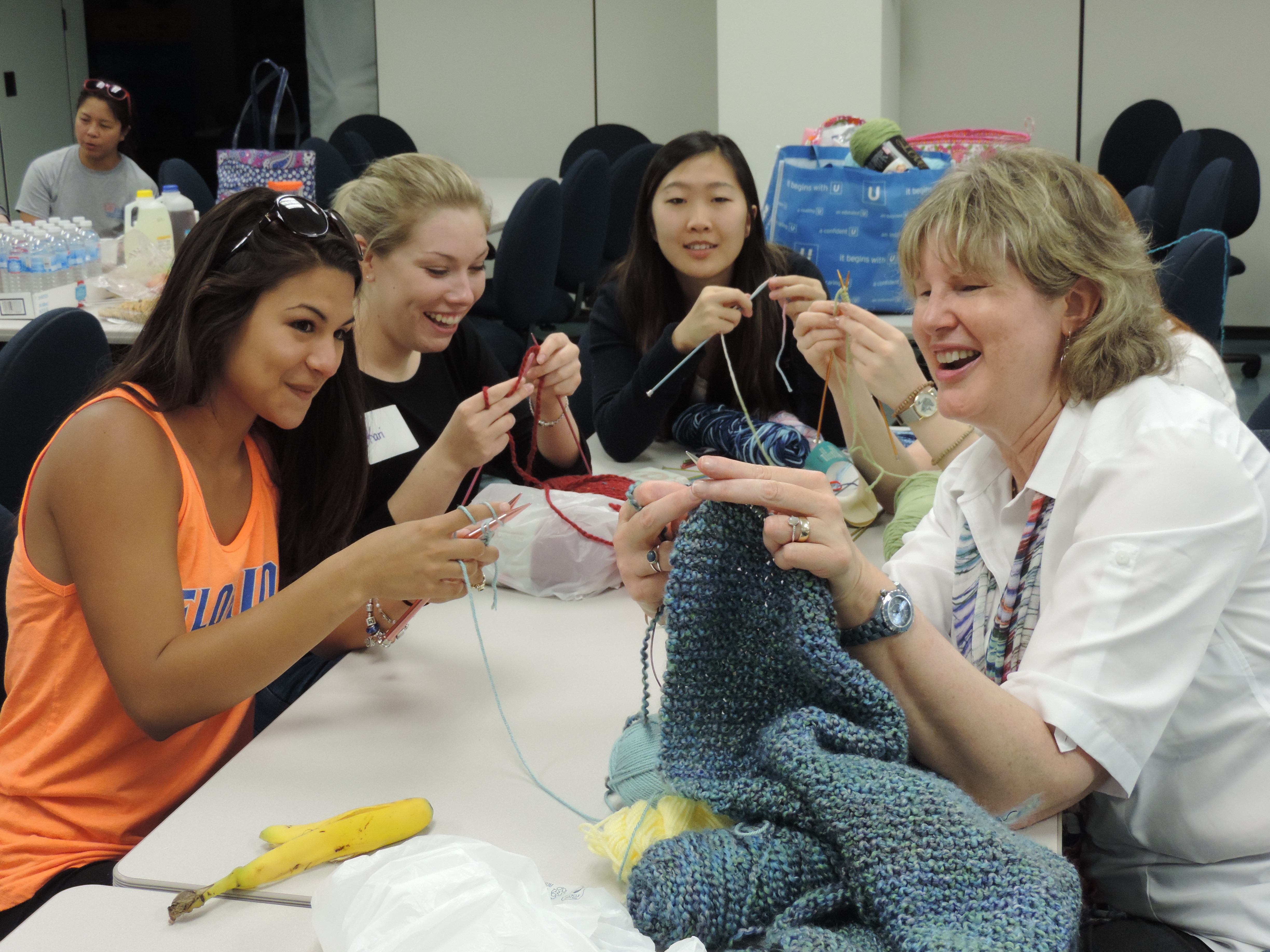 As volunteers for the College of Nursing’s Comfort Shawl Project are all too familiar, learning to knit requires practice and patience. Eventually, however, snarls turn to shawls, and the frustration to exhilaration. But nursing students and adult volunteers who create shawls for patients do more than just knit — the project encompasses a variety of activities, from gifting the shawls to children in pediatric units and adults receiving palliative care, to recruiting new volunteers and writing reflections and thank-you notes. For some, the work is a means of connecting with patients and fellow nursing students. For others, it has changed the way they think about their future careers.

“The real heart of nursing is finding a way to make this person feel they are important and that they deserve care, that they deserve comfort and happiness,” said Cassandra Thorla, a graduate of the College of Nursing. “A lot of times patients are in the hospital for what they think will be three days, and it ends up being three weeks. Something like this can really change their perspective on their whole stay.”

One of Thorla’s family members received a comfort shawl, and her involvement in the program has her seriously considering becoming a palliative care nurse practitioner. Seeing the program’s impact on students is just another reason that College of Nursing professor Toni L. Glover, Ph.D., GNP-BC, ACHPN, remains so heavily involved since starting the project.

“I see it as a unique opportunity,” Glover, one of the project’s leaders, said. “The College of Nursing has a tradition of research, teaching and service. We immediately saw the service capability and educational opportunity here. It’s really taken off.”

This year the students have visited with the Needlers knitting circle at Oak Hammock, gifted smaller blankets to families with babies in the NICU, read “Being Mortal,” and are preparing to tour the Haven Hospice Care Center and gift shawls to patients and families there.

New student volunteers have been clamoring for spots. Student Brennan Philbin said she was drawn to the project because it offered an opportunity to look at the compassionate side of clinical care.

“So far — in clinicals and stuff — it’s very skill-based, without a lot of focus on communication,” she said. “This way I get to hear people’s stories, and have some time to sit and talk to them. It’s worth it if we can provide even an ounce of comfort.” 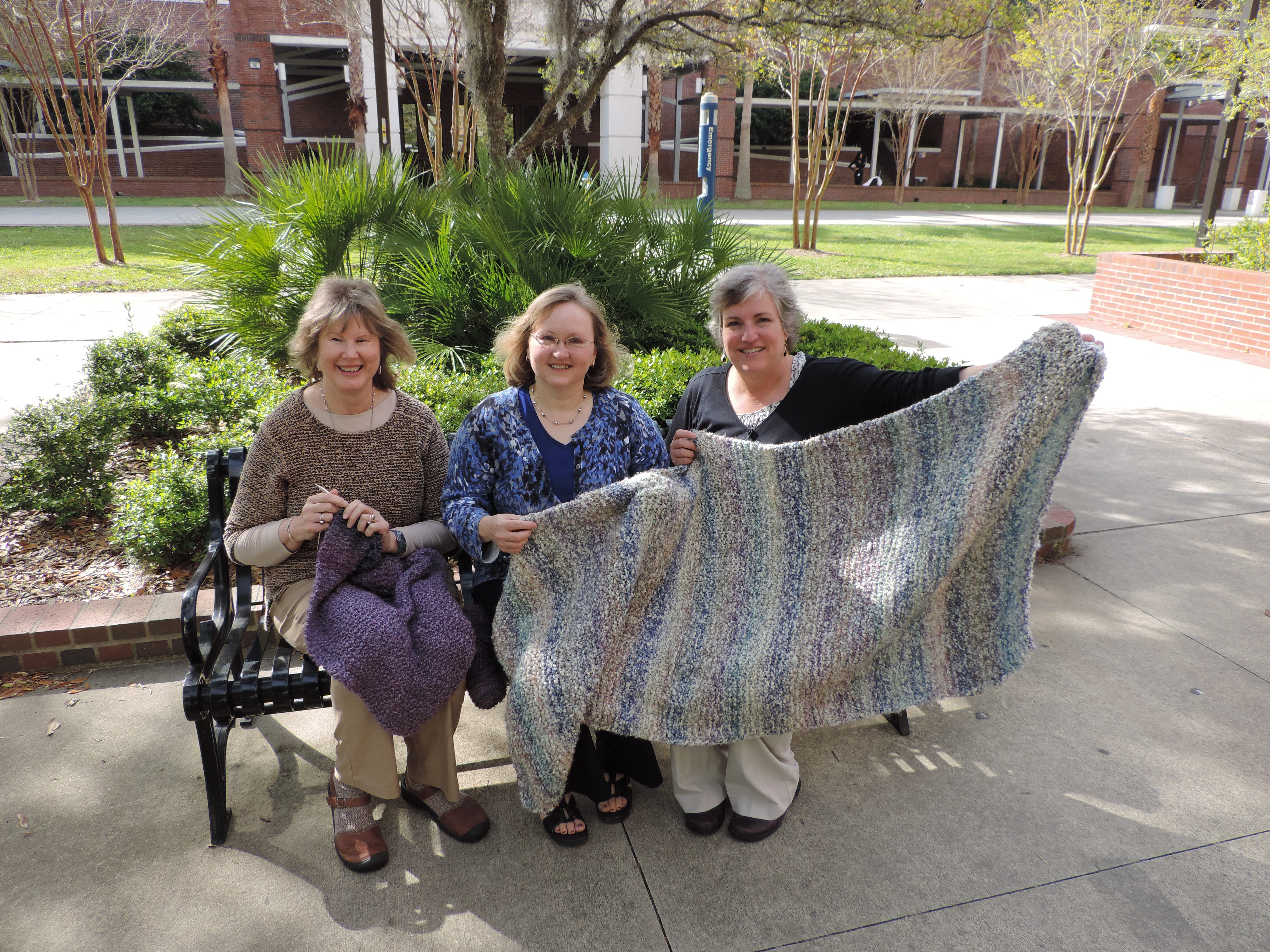 The shawls are beneficial not just to patients, but to their makers as well. Studies have shown that knitting and other forms of needlework help to prevent and manage stress, pain and depression, and by extension, aid in the strengthening of the immune system. The intergenerational teaching that occurs in each knitting circle adds a dimension of depth to the work that is rarely found elsewhere. Of shawls produced, over 40 percent are made by volunteers Clara Tyler Reed and Else Berger — two women whose knitting efforts have earned them the title ‘superknitters.’ But if you ask Reed, the students do just as good of a job as they do.

“We started teaching the girls when they visited the Thelma Boltin Senior Activity Center,” Reed recalled. “And they wanted to learn. They saw us knitting — because we’re always knitting — we’re just old hands at it, you know. It is uncomfortable to sit and do nothing. We really have to keep something in our hands. That’s how it started … the girls were so eager and they were such good students and they picked it up so nicely, that it was just a joy to teach.”

The College of Nursing’s Comfort Shawl Project has come a long way since its first knitting circle in April 2014. There are more than 80 volunteers and the number of shawls donated in the second year tripled. And the project’s future — much like the shawls it produces — is bright.

“It pleases us very much, because it’s something that is important to us. We’d like the future generations to get as much from it as we have. It’s very restful and fulfilling,” Reed said. “When you make something, you’re a creator. You’ve created something, and that’s a pretty powerful emotion.”